Theodore “Bubba” Pauli is a competitive, rising star in the world of motocross. The midwest native grew up – and still resides –  in Edwardsville, Illinois, a small town near St. Louis. While Pauli does most of his training around the midwest; he competes around the country. Pauli, 25, shows no signs of slowing. He competes in the 450 Pro classes. After a strong amateur career Pauli earned his AMA Professional License, and made the jump to the Pro ranks. In 2014, while riding for the “2DIAT / Big St Charles Motorsports Team” Bubba qualified for 5 Monster Energy Supercross programs. He kept the momentum going into the outdoor nationals earning a career best 24th overall at High Point Raceway in the premier 450 class. In 2015 Pauli earned a spot on the “K1speed / BWR Engines” race team where he completed 2/3 of the Monster Energy Supercross Series and qualified for all but one programs in the 450 class. Moving on to 2016, Pauli was determined to complete the entire 17 round Monster Energy Supercross Series. In order to do so he assembled his own program and hit the road. During the 2016 season Pauli qualified for nearly every program, only missing the cut a few times early in season. Once the momentum got rolling Pauli found himself knocking at the door of main events in the very competitive, premier 450 class.

In 2017 Pauli gained support from several more companies, really taking his program to the next level! While qualifying for 16 of 17 Supercross events, Pauli made it to the next level by qualifying for his first main event in the 450 class, with his career best being 18th overall. Pauli finished the 2017 Monster Energy World Supercross Championship season 37th overall in points.

2018 brought big changes to Pauli’s program. Partnering with fellow racer Michael Akaydin to create a 2 rider race team, allowing more opportunities to interact with fans and bringing more attention to sponsors. Pauli would once again continue to improve on his racing results and marketing strategies. Bettering his results each week as the season progressed, Pauli qualified for the very prestigious Triple Crown event in Minneapolis.

After earning top 20 finishes in both 2017 and 2018 Pauli is determined to be a top 15 guy in 2019. Not only is Pauli looking to better his results but he also has established a 3 rider team for the 2019 season. We will update with more information as the team begins to unfold.

Pauli is extremely thankful for all the support from his sponsors, please visit them HERE 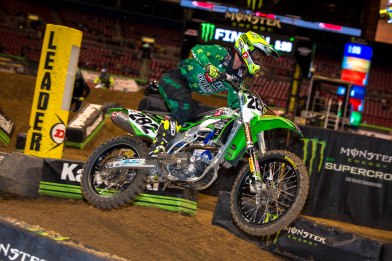